Are tiny houses coming to Salem, OR? 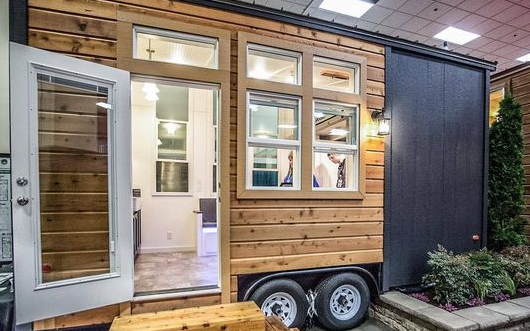 Whatever you call them, they’re all the rage – except in Salem.

But that soon may change.

Salem is facing a growing housing shortage, and ADUs could be the answer, city officials say.

Salem’s ban on tiny houses dates back to the 1920s, when the city first put zoning in place. Accessory dwelling units just weren’t put in code.

Older neighborhoods that predate zoning may have a few ADUs, and those are legal. But none have been legally built for nine decades.

A 2014 study found that Salem needs an additional 207 acres of land for multifamily housing, or 2,897 units, to meet projected population growth over the next 20 years.

Lou Pereyra, Principal of Tiny Mountain Houses, says his company has one solution to the shortfall.

“I am currently involved with several city’s building departments and housing authorities to establish criteria and sensible elements that directly apply to affordable housing solutions,” Pereya said. “My hope is that if Salem is truly taking the next step, that they take a hard look at what other cities are allowing to become more flexible and lenient with requirements related to ADUs”.

“Due to the smaller size of building lots being created today, it’s more likely that ADUs will be associated with homes in older neighborhoods that sit on larger lots,” said Mike Erdmann, CEO of Home Builders Association Association of Marion & Polk Counties, which supports the code change. “The city’s challenge will be incorporating neighborhood concerns with the necessity of relaxing existing zoning standards.”

Don’t worry though – Salem isn’t going to become Portland, which has been called the nation’s tiny-house capital.

“Whatever regulations come out of it will be tailored to the needs and concerns of Salem,” Kim said.

Staffers already have solicited input from neighborhood associations, community groups and business groups. An advisory committee will begin meeting later this year. And outreach meetings will take place before rules are adopted.

Among the questions being considered:

“I realize there are a lot of folks that are not too keen on having higher density in their neighborhoods, but the need for affordable housing is going to continue to grow really strongly,” said Andy Wilch, housing administrator for the Salem Housing Authority. “Those units are going to be closer to jobs, resources, everything.”