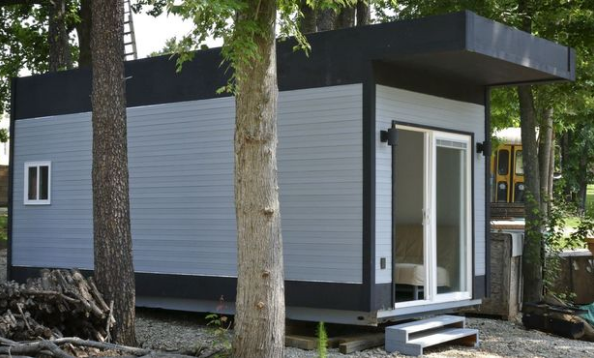 John Williams of Winston-Salem made a tiny house from this containerized freight module. Photo by David Rolfe

Regulations that could determine where people might have tiny houses or other secondary dwellings on single-family lots appear certain to get a lot more discussion as members of the Winston-Salem City Council found themselves poles apart on the issue in committee on Tuesday.

City officials say the regulations now on the books are unenforceable because of recent court decisions, but that doesn’t make it clear what should take their place.

The rules were discussed in Tuesday’s meeting of the Winston-Salem City Council’s committee on community development, housing and general government.

Two widely diverging viewpoints emerged in Tuesday’s discussion: That secondary dwellings could ruin the character of neighborhoods with single-family dwellings; and that such secondary housing is needed in an era of more people getting older or being attracted to a high-density urban lifestyle.
The city has allowed secondary dwellings on single-family lots as long as they were occupied by relatives, caretakers and the like, but Council Member Jeff MacIntosh said the rules are widely flouted because the city doesn’t carry out inspections to make sure the rules are followed.

City planning staffers say that the courts have ruled that occupancy rules can’t be based on the status of the person living in a dwelling. That kicks the props out from under the city’s current rules.